Spring 2009: Fortune Smiles Upon Us A Second Time

Last summer, Deniz invited us over to Billings for a dinner party, prior to heading back to Australia. Besides drinking and eating, he wanted me to meet his friend Bob Brown. Bob is a Montana native, and a life long musician. He toured with Deniz on the Vertical Tour in 1992. They also had a local band in Billing for a short time. I don’t know if Deniz had already decided that Bob might fit into the Brain format, but he had suggested we talk about our recording studios to see if we could easily exchange files. 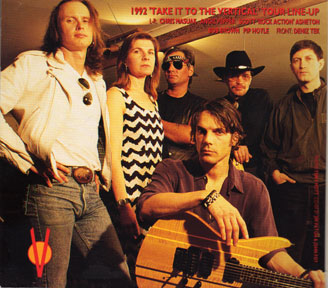 In the meantime, Deniz had offered the Radio Birdman out take Vanished as his contribution to the Brain album. There are two demos, an instrumental version recorded with Ron Keeley and a Zeno Beach demo with Rusty on drums, and a vocal attempt by Rob Younger. I learned the song, and worked up my own demo, and suggested a Brain like approach to this tidy little song. Deniz agreed to try this, and suggested we record it in Billings with Bob, and Tony Horton. This would give me a chance to work with Bob and have a look at his studio. I’d known Tony for a long time, but I’d never seen him play drums. I figured we might be able to have go at my song 4 Trials while we were set up. I had already decided that this wouldn’t be on the album, but an extra song is always handy. A few days before the session Den said he thought an instrumental version would be what he wanted to do. I had other ideas, and asked that he prepare some new lyrics. Vanished would be a part of the song cycle on side two of the album, and would need to continue the theme. A week after the session for the basics, he returned to Bob’s for vocal and guitar overdubs. After recording the vocals, Den decided he wasn’t happy with the lyrics, and set out to write a new set. This was accomplished just before he left again at the end of the year.

Bob and I now needed to work out a method to get the session tracks off of his hard disc recorder and over to GLEA to be completed. The first suggestion was for me to take the Fostex back to Bozeman. At this point, there was more work to be done in Billings, so a more practical plan was needed. It turned out there was a simple way to do this, but it had never been necessary for Bob to work this out. I had taken a quick look at the manual, but Bob didn’t have the required software to connect his recorder to his PC. It took a some trial and error before the transfer was successful. By this point, it was clear Bob would be coming to Bozeman to take care of our bass needs. I had left him a collection of rough mixes, so he knew what he was getting into. His busy schedule meant he wasn’t able to commit to a session before the end of March. In the end, this proved to be a lucky break, as were were able to finish recording the drums before he would arrive. 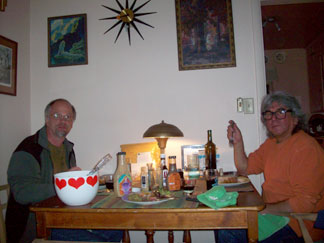 Only one day would be available to complete the work on seven songs. This wasn’t an impossible task, but meant some serious preparation would be required. When he arrived on Saturday evening he expressed some concern about two of the songs, and asked I save these for last. In the end, there was little reason for worry. We worked from 10 in the morning to nearly 7 in the evening, with a couple of breaks. Bob had learned all the songs, and had great ideas right from the start. It was then just a matter of refining his parts, and adapting them to the new drums on the tracks. I had recorded scratch bass on all but one of the songs, but there was never any suggestion Bob had to learn these parrot fashion. He was expected to work out his own ideas. Right from the start it was clear he had done his homework well and would be making a considerable contribution to all the songs. While recording Vanished, he had come up with a clever arrangement idea, so I knew he could think under pressure.

By the end of the session we were both exhausted, but excited by the results. Bob asked if this days work earned him a membership in the Brain, to which I quickly agreed. Little does he know we hand out membership cards like Halloween candy. With the work done, we were able to enjoy our dinner and drinks knowing we wouldn’t have to go back to work later in the evening.

Over the course of the drum and bass sessions, I was compiling ideas and noting where repairs would need to be made. The new rhythm section recordings “opened up” the tracks considerably. After living with the drum loops and temp bass for the better part of a year, it was now finally possible to hear the spaces in the songs, and to feel the give and take Bob, Ron and Mike had added to the songs. While working on rough mixes, I found myself removing some of the guitars we had recorded as they were no longer necessary to carry the songs. Our method of recording is a bit like sculpture, you start with a lump of clay, and remove all the excess material until you are left with a thing you can call art. 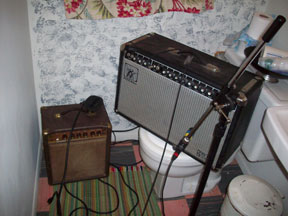 The month of April will be dedicated to the final overdubs. Bob Sutliff has been sent several tracks to work on and I’ve been busy with overdubs on several tracks. Vocal sessions are being arranged. Lead vocals have been recorded on all but one of the songs. Bobby wanted to hear the final drums on his tune, You Gotta Go Now, before he attempted the vocals. I will be returning to a couple of songs to try to bring my parts up to snuff. Colter should be in to add some background vocals to a few songs he’s not played on yet. I have also talked to my friend Lila about doing some vocals. She seemed willing to try. She sings in the church choir and the local symphony. Plus she’s a big Kinks and Beatles fan. There may be a few others involved with this detail work. Much will be decided next week after all the rough mixes have been completed.

The first weekend of April was spent running off quick rough mixes of all thirteen songs. At this point, I’d not heard Vanished with Liz’s vocals. There were three tracks recorded, but no notes indicating what was the intent. Taking a cue from Deniz, I opened up all three vocal takes and listened to each one, a phrase at a time. In the end, a spectacular comp track was assembled. I had floated a few ideas about how this song should work, and this vocal line fulfilled the request. I don’t want to give too much away, but I can say, the inspiration for this arrangement is a band both Deniz and myself share an appreciation for.

As soon as I listened to the ruff mixes, it was clear we needed to do a few repairs. I rang up Colter, who came around and did a bit more work on Carefully Considered Answers, and added his voice to The Same Mistakes. There are a couple more I’d like him to sing on. We will probably get to those in the coming week. I returned to a couple of songs and got the vocals into acceptable shape. This now meant we were ready to see what Lila could do. She’s never sung on a rock record, and her only recordings have been as part of a group, so this was all new to her. It only took a few minutes for her to grasp the concept and methods. We worked on four numbers, and rehearsed another one to be tackled later. The welcome addition of Lila to the mix helps fill the gap left by the loss of Megan Pickerel, who has moved back to Seattle. Lila brings her own style and skills to the table, giving us a much needed trained voice which serves to glue together the rest of us. 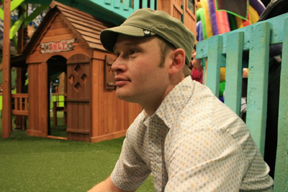 We are also excited about some unexpected assistance from Tony Miler. Tony is the lead singer for the fantastic band Ideal Free Distribution, a band based in Kentucky. I was introduced to Tony by our mutual friend Valis. You can read reviews of the two IFD albums on the Career reviews page. While talking about making records, Tony generously offered to lend a hand if needed. I had considered asking him, but was reluctant to add another name to the work sheet. He’s currently studying the five songs I sent to him to consider. Meanwhile, Bobby Sutliff is digging into his list of finish work which included guitar solos on Last Acid Rider and Broken Glass Corner. Final vocals on his own You Gotta Go Now are currently being assembled. Deniz will be here this weekend to review tracks and add anything else we need from him. If all goes well, we will be into mix mode in May as planned.

The running order of the album has been set for a while now. There are several considerations, the primary goal is to create an experience that has some unexpected twists and turns. You always want the listener to wonder what could come next. We also have to take into consideration there are four songwriters and, on this record, five lead voices. It has only been recently that we heard all the songs with final bass and drums in the order they will appear on the record. Now it would be possible to get a good feel for where the songs, as part of complete work, are at. – Update- As soon as I said “the running order is set”, I had a major revelation, and decided to shuffle the tracks a little.

While others have been adding additional vocals, I’ve been applying some sonic textures and colors where needed. You Gotta Go Now saw the addition of some strings, and backwards guitar. Thinking Of Neutrons also had some more keyboards added. The song only uses about half of the original track I recorded. There was a natural break where Deniz suggested we fade it. The addition of a final chord now gives the song a proper ending. A complex plan for the ending of Wooden Horse is being avoided at the moment, but will be sorted out in the next few days. There are probably a few percussion bits to be added, but this can be done when the studio is set up for mixing. It’s not uncommon to keep adding material right up to the very last moment. Only one or two of the songs have maxed out the track count.

It is entirely possible we will be done at the end of next week. Colter and Lila are scheduled to come to add their final contributions. Bobby has nearly finished his work. Tony Miller has just sent over his first attempt, and been told to continue at full speed. Deniz may have some ideas when he visits the studio this weekend. He is prepared to do what ever is needed in the two days he’ll be here.