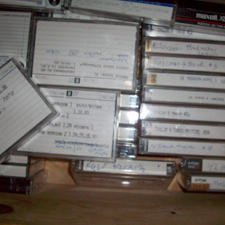 The 4-track Tascam Porta One and Fostex small format 8-track reel recorders were the perfect tools to help develop the Donovan’s Brain sounds. It was always exciting to hand out copies of our tapes to friends, no matter how rough they might now sound to our ears. These three compilations represent five or six years work. The leaps in quality are dramatic. Parts of Butterfly Wheel and Shambaholic pretty well define most of what was to come. Surprisingly, there are moments on the earliest recordings that hint at the familiar Brain styles heard on the official releases. Four songs from Butterfly wheel and nearly all of Shambaholic have been released in one form or another, some more than once.
Peer Pressure League (1990)

The first recording to appear under the Donovan’s Brain banner. Mostly 4-track, but the the last few things were 8-track. Recorded between March 1988 and March 1990. The Live Time performance was broadcast live on KGLT-fm, 12 June 1989. Cat Nip, one of the songs performed was taken from an obscure Australian EP by the mysterious Viet Nam vet, Ony J Holy. Broken Time Code was rewritten as Human Is, which appeared on Great Leap Forward. Perky Pat is the oldest song here, and has reappeared in various forms, depending on who is playing it. A bit of it was tagged on the the end of Bondi Tombstone. Not much else to say about this, except this is all you will ever hear of it.

“Recorded at Egg studios in Seattle, and at God’s Little Ear Acre in Bozeman, Montana. Butterfly Wheel was produced by Ron Sanchez and Scott McCaughey, and engineered by Ron Sanchez and Conrad Uno. This neatly produced cassette only release is a tight and professional little package, well worth seeking out if you’re new to the delights of Donovan’s Brain.” – Julian Gough

A quantum leap in song writing, performance and recording. The original idea was to release an EP of the Egg sessions, but this was scrapped pretty quickly. In most cases, Jim performed his songs, and Ron his own individually. The one collaboration was Jim’s Cary Grant. I’m sure we had the Stones in mind when we recorded this one. Colter finally joined in at this point, and eventually became the other principal songwriter in the band. Beautiful Enigma is one of the missing links. It sounds like QMS meet the Cure. 50,000,000 Years was the first song of the next phase, and was released on our Get Hip 45.

Working with The Young Fresh Fellows was a serious learning experience. It kicked up the quality of everything we did afterwards.

After the release of Butterfly Wheel, recording resumed at a more serious pace. A number of songs that would appear on the next four albums were written during this period. In 1991, it became apparent that there was a thread running through several of the songs. Make A Noise Quietly was the final piece needed to tie it all together. In fact, it’s a variation on the same musical structure as Row Out. Before the album was finished, we were asked to contribute a track to the first volume of the Hit The Hay series. Jerker Emmanuelson chose Dandelions Are Back, which meant the version we gave him is slightly different from the version that appears here.

While waiting for these deals to move forward, a new Donovan’s Brain line up was put together. Jason McKnight came in on drums, and Paul Rose picked up the guitar. Jim Kehoe rounded out the line up. The original plan was for everyone to write songs, and we would all handle bass as required. Jim never brought any original songs to the band, despite our pleas. The only Shambaholic song this band performed was Pollyanna Disillusioned. Several of the unused songs from this period of song writing did make it to the new Brain set list including: Central Services, Two White Spiders, Dull Days, and Moon Shines. The story continues with the band beginning work on the album that will come to be known as Eclipse And Debris.

The restoration of Shambaholic is now complete.The restored album is now titled Shambaholic And Other Love Songs. The original twelve song album has been supplimented with three songs from Butterfly Wheel plus the original version of Perky Pat. The album was released in October 2014. Read More Here 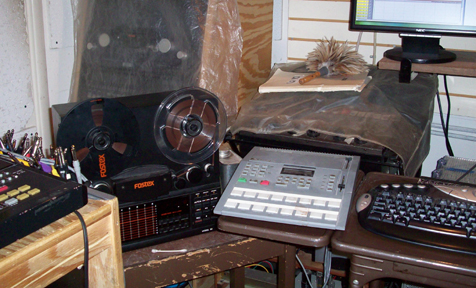