Broken To Pieces Before It Hit The Ground 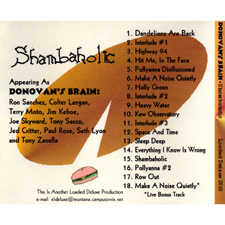 The Missing Album, Can You Find All The Parts?

During 1989 an all new Donovan’s Brain took the stage for two days of the Rolling Stones tribute ‘Exile On Rouse St’ festival at the Filling Station, Bozeman. The line-up of Tony Zanella on bass, Don Mazzola on drums, and Ron Sanchez on guitar were surely the only band in Bozeman with a ‘Z’ in every name. Tony Zanella only ever did one Brain recording session, on the title track for the rock opera ‘Shambaholic’ which remains unreleased (Update). Tony played in a number of Bozeman bands around this time, joining up years later with Paul Rose and Jason McKnight in 1997 as Mullray. 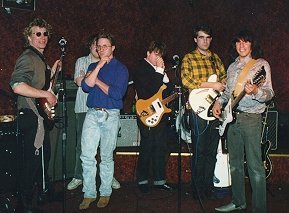 In 1990 it was suggested Donovan’s Brain make a visit to the famous Egg Studio in Seattle to record. The original idea was for Jim Kehoe, Eric Danzer and Ron Sanchez to be joined by Jim Sangster from friends, The Young Fresh Fellows. The Fellows had passed through Bozeman to play a show while on their way to record with Butch Vig in Madison, Wisconsin. Vig had just completed the as yet unreleased Nirvana album ‘Never Mind’. The Fellows had asked some of their favorite producers, including Nick Lowe, to produce their album Electric Bird Digest. Butch Vig was the only one to respond, and took the job. On the return trip, the Fellows again stopped to visit the Brain in Bozeman. Eric Danzer had to drop out of the plans for the Seattle recording session. Jim Sangster quickly volunteered YFF drummer Tad Huchison. Tad had taken a flight home, leaving him out of any discussion.

Jim and Ron each brought two songs to the studio. Jim had the topical song Groovy and the rocking Fashion Magazine. Ron brought a song called Follow The Shining Path, and a brand new song written especially for this event, Under Dose. The latter was inspired by the Stones tribute of a few months earlier. The week in Seattle also featured a big gig with Sonic Youth and Neil Young and Crazy Horse. Sonic Youth were in Egg the night before the Brain sessions, leaving Scott McCaughey to comment about the special ‘vibe’ left behind. The four songs were completed in three quick sessions. Jim Sangster played the bass and double up of guitars for all the tracks. This was the first chance for the Brain to work in a proper studio. 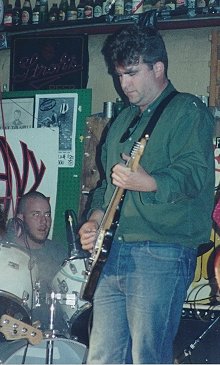 By this time Brain base, GLEA had installed an eight-track deck. By the end of 1990 the new album Butterfly Wheel had been completed. The song writing was split between Jim Kehoe and Ron Sanchez, with Colter getting one credit, and a cover of Help Yourself’s Pioneers Of The West. Butterfly Wheel was well received and gained good reviews in Bucketful Of Brains, Terrascope, and the BOB, an occasional publication emanating from the Philadelphia area.

The notices brought attention from around the world, including Sweden, where Jerker Emanuelson was planning his first Hit The Hay compilation. Two songs were submitted to Sound Asleep for consideration. One was a reworking of Butterfly Wheel’s time travel epic 50,000,000 Years Before My Time. The other was one of several new songs, Dandelions Are Back, which was quickly finished and sent off to Vara. Jerker being a big fan of Power Pop took a liking to the Flamin’ Groovies influenced song immediately.

By this time in early 1994, Donovan’s Brain had recorded nearly 24 songs. With no prospects for a full-length release, it was decided to keep working until there was a reason to stop. The interest in Sweden sparked the idea for ‘Shambaholic’. It became clear that a lot of the songs were linked thematically. Ten songs were designated for the opera, and the rest were set aside for the moment. Two more songs were written to round out an album. Make A Noise Quietly was inspired by a line heard in a Laurel And Hardy film, its music was a reworking of a song called Row Out, which was also included on the final edit of Shambaholic. The second new song, Hit Me, In The Face, sprang from an idea that Ron got while watching the Woggles at the Garage Shock Festival in the spring of 1994. Jim Kehoe wrote most of the lyrics, and sang lead with Paul and Ron chiming in on a few lines.

Joining the Brain in the studio were old friends Joe Howard (aka Joe Howeird, Joe Bass, and Joe Skyward) who played bass on Holly Green, one of the first songs cut. Jed Critter made his guitar contribution and Joey added a few lyrics to Holly Green when they visited Bozeman. Pianist Tony Sacco made his first appearance with the Brain on this song. Colter and drummer Terry Moto rounded out the personnel for Shambaholic and related sessions. 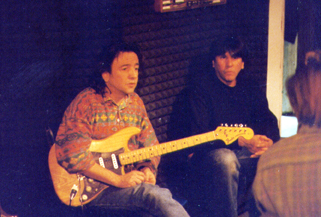 The album was completed during the same week that the Swedish Hit The Hay compilation was released, marking the Brains first official release. Three days later Ron flew out to Seattle to meet up with Welsh legends Man to produce their album ‘Call Down The Moon’.

In January of 1995 the Brain began working on the material that had been set aside while completing Shambaholic. Jason McKnight was recruited as the new drummer, and his first session was overdubbing drums on a recording of Joey’s In The Pouch. When Paul Rose’s band ‘K’ hadn’t come up with a satisfactory recording of ‘Joey’, Paul asked Ron if he would cut a Brain version. The track had been recorded two years earlier, and put on the shelf. When Paul heard the results, he made it clear he was ready to come and play with Donovan’s Brain. With a little persuasion, Jim agreed to sign on too. The plan was for all three to share the bass playing duties. The material was meant to be an equal collaboration, but in the end Jim opted not to bring any songs to the table. Between February and August the Brain recorded and gigged around Bozeman. The band quickly earned spots on the bill with the likes of Southern Culture, On The Skids and Man Or Astroman.

The constant rehearsal and recording had resulted in ten or eleven tracks being committed to tape. That summer the band expanded to a five piece with the addition of Robert Wilbraham on keyboards. Rob was a young friend from London, who was spending his holiday in Montana. This was the first chance to hear the songs performed the way they were written, but it wasn’t long before the cracks began to show. Paul refused to record two of the numbers that the band had learned and performed live, and his erratic stage antics came to a head when he disintegrated on stage while the band was opening for Man Or Astroman. According to Ron; “The set ended in a cloud of smoke, a broken guitar, and bad blood.”

Just a couple of weeks later though good news came in the form of a deal with the small German label Magical Jack. Norbert Schilling had heard the Shambaholic tapes and wanted to know if he could release four of the songs as an EP, Light Proof Visions. A short time afterwards The Cynics record label Get Hip also called, this time asking for a Donovan’s Brain 45. They had opted not to take Man’s Call Down The Moon, but Gregg Kostelich was knocked out by Shambaholic. The single was to be Hit Me, In The Face and for the B side the Swedish remix of 50,000,000 Years was dusted off and given an outing. With six Shambaholic songs now released, the chance of hearing it in its original form seemed to be slipping away. 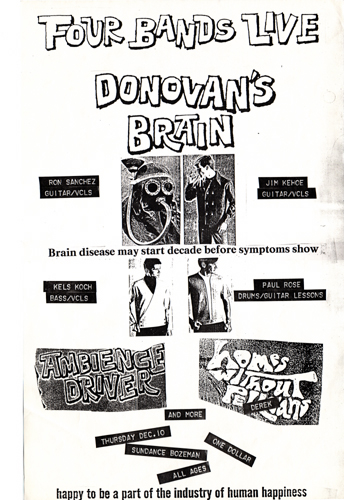 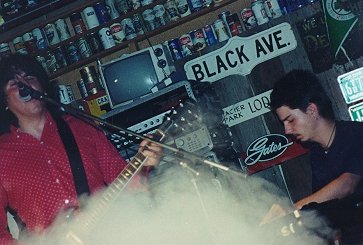 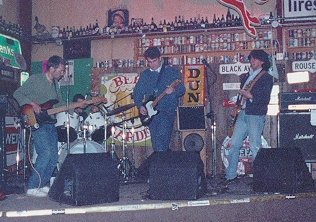