It seems much longer than 3 years since the last Donovan’s Brain record. I had to look at the notes to see when Defeat Of Echoes was released. I’m still not sure about the time line. It seems like one long march. The week Echoes was release, I flew out to Seattle to begin work on Roy Loney’s album, Shake It Or Leave It. That project took up most of the next three years. At some point, Colter and myself began recording demos for some new ideas we had. That could have been in 2005, but I’m can’t really say. After that most work towards the next Brain album stopped. All of 2006 was dedicated to Roy’s album. And as that began to wind up or down, I started work on the Where The DJ’s Roam film score. Never a dull moment here at Career HQ.

Late last year, 2007, the table was cleared, and the first steps towards restarting work on the Donovan’s Brain album No. 6 were taken. There had been some small activity when we worked on a song for the Dream Magazine compilation. In the end it was the Echoes out take, Dim Gem, that was used. But as soon as we started, the Christmas holiday interrupted work, and at the beginning of 2008 my father died. The only thing I could think to do was a bit of music therapy, which resulted in a new song and work on some of the existing demos.

In an unexpected burst of activity sixteen songs have been assigned to the A list. There are a couple of others that may move up as time progresses. One of my original ideas was to do a cover of the Bobby Sutliff song Oh, Lorelei. I had an idea for a much different arrangement from the version that appeared on his fab album On A Ladder. While working on that, Bob sent over a demo of an idea that he thought I could use. I quickly turned my attention to that one. There were some lyrics for a mini opera idea called High Street Hitman. The story had been written out, but no music had been prepared. Bob’s idea seemed perfect, though it required a new concept for the song. I rearranged it some, and added a chord or two to the middle eight section. Bingo. 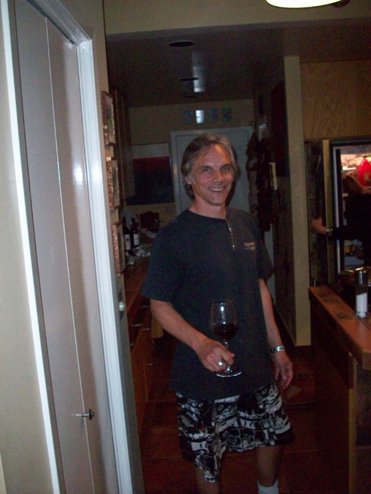 Colter had recorded a load of demos for The Great Leap. One untitled song was never attempted, but it’s one that I thought we should return to. Last year I hit on an idea for a new approach to this one. Colter and I cut a new demo based on the arrangement I’d worked up. It was close, but still not what I was hearing. When Deniz was over a couple of weeks ago, I explained what I was thinking. He gladly agreed to tackle this problem and two hours later he had nailed the concept. We left space for Bobby to play the harmony part. I know what I’m going to play. Now it’s up to Colter to finalize the lyrics. The working title is “Fleetwood Mac” as it is based around a Mick Fleetwood drum loop.

While working on the Fleetwood Mac demo, I asked Colter to play one of the songs he’s had for a while. It was something called Come For The Sun. We cut a demo, which required working up an arrangement, writing the bridge and working out an ending. It was another one I thought would be good to get Den to play on, as it has a short solo section. On first hearing he exclaimed “this isn’t a Brain song, you should give it to Roy”. I convinced him it was one we were gonna keep, but I did like his idea of getting Roy involved. This was made easier when Colter heard the results and wondered if he could actually sing it. I told him Den had suggested it might work for Roy’s voice. A Session is planned for next week, when Roy is in Seattle to play.

In a weekend of Brain activity, the real action was at Johnny Sangster’s studio in Seattle. Roy completed his assigned tasks efficiently with great results. I would have been there for the shows, and to oversee the recording session but as it turned out the 2008 Sip And Dip Party fell on the same weekend. This also marked the first time we’d seen Jeff in Montana in nearly a year. Sadly, Ron Craighead was down in the Utah desert for his annual birthday trek. Still the chance to see four of the principal members of the band together enjoying some drinks was cause for celebration. Talk turned to the new album and demos were exchanged. Deniz has promised to forward his notes and suggestions for the new songs this week. Ron C took his copy of the new song demos and tracks with him on his road trip, so we await his first reactions. There is also talk of a recording session in June, to lay down some basic tracks for two or three of the songs that would benefit from the live in the studio treatment.

There is much more to tell, but you can see time has been spent making the record, rather than writing about it. A summary of the activities will follow soon…