Work on a Donovan’s Brain album never goes fast enough for me. Then there is that moment, after listening to a song for a year or more, a fresh idea arrives. Fires Which Burnt Brightly has only been under construction for just a year now. A few of the songs have been around a bit longer, but the serious work began in January 2008. It’s now that the album is moving into the detail phase. Final vocals are now being completed.

Colter, the other major contributor to this album, is responsible for the vocals on his four songs. Early on, we assigned the vocal chores on Come For The Sun to Roy Loney. Colter added a second line a couple of weeks ago. An attempt to double Roy’s vocals on the verse proved to be unnecessary, but the second voice on the chorus worked as planned. The song now called Carefully Considered Answers has been long in the making. The original idea dates back to Great Leap Forward. When we started working on this album, I come up with a concept for reviving this piece. After discussions with Bobby Sutliff and Deniz Tek, it was clear we could make it happen. The lyrics were the sticking point, but I found the idea while driving over to Billing in November to record. I cut a vocal track, which seemed to work, but I never intended to do the final vocals. When I sat with Colter to review the song and lyrics before the scheduled session, he finally got his head around the idea I’d been pitching for a year. When he returned to sing the track, it came out sounding natural, and not too far removed from any of the other songs he’s brought to us this time. I’m always nervous when others sing my lyrics, but there wasn’t anything that Colter felt the need to change.

The next vocal sessions scheduled will be dedicated to a new lead vocal track on I Saw Your Light. I figured this song deserved a fresh take to bring it up to contemporary standards, in the same way the new drum track gave the song a sonic lift. I have also approached Jason Lytle about doing some background vocals on this one. I don’t want to give too much away, but this one screams for a treatment and Jason would be the man to do the job. 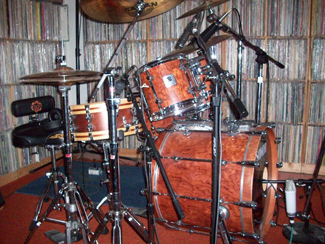 After a long delay, Ron Craighead has returned to work on two more songs, before he had to move his drums out of the studio. Come For The Sun and Last Acid Rider are now in the “drums done” column. Five songs are still in need of drums before we can begin the final work on those. A Defeat Of Echoes was written and recorded with the all four member of the band in the studio working on arrangements, rehearsing and recording the songs together. This made for a bit more organic feel. The album version of Control and The Boy Who Cried New Town were the only exceptions to this rule. In both cases Jeff and I were not satisfied with the band arrangements, and the resulting recordings. The remakes of both were done to blueprints dictated to the band. When Jeff moved away, it was clear this sort of group effort wasn’t going to be possible for the new album. There was talk of regrouping for a long weekend of recording basic tracks, but nothing every came of this. Rather than record demos to present to the other band members, it was decided to record the tracks as masters and then add the drums at a later date.

Right from the first demo session onwards, it was our goal to create a compact set of up tempo songs. In the end, we successfully met the “compact” goal, but the addition of I Saw Your Light to the final song list, meant there would be at least one ballad on the record. I have been working on the running order for some time now. I figure it’s a good idea to see how the songs fit together to create an ever changing mood from start to finish. The fact that that there are five lead singers on the record make this tricky task even more difficult.

Just as important is a good title for the album. I’m always open to suggestions, and a sheet is posted on the wall for everyone to write down any good ideas. The new album was just called Number 6 for the first several months of the project. It’s hard to say where the title Fires Which Burnt Brightly came from. There was never any discussion, once I’d written it down and nothing else was ever considered. A few weeks later, as I was tinkering with the album running order, I realized that several of the songs had a loose, very loose, thread tying them together. The album title seemed to be the element that linked these seven songs. There is no heavy concept, no dialog, no Stan Unwin linking bits; just a happy accident. Once you hear the record you may or may not see the point. At the least, it gives the album some structure. More recently I’ve swapped tracks 1 and 5 on “Side One”, the song side of the record. A small change, but it makes the album flow and build a little better. All this could change again before we are done, but I think it’s fairly well set now.

There are still some major issues to be resolved before I will feel like we have rounded the final turn. So far everything is going well enough that we are now talking to the duplication broker, and making some choices about the packaging.

As we entered the cold days of March, four studios have been busy with work on Fires Which Burnt Brightly. Liz McKenzie added vocals to Vanished while she and Deniz were working on the Soul Movers record. The results have just arrived and exceeded my expectations. Anyone familiar with the Radio Birdman version of this song will be very surprised. Jason Lytle graciously took time out from his own busy schedule to perform some overdubs on Colter’s I Saw The Light. As usual he saw it as a challenge and performed beyond the call of duty. Bob Sutliff has been gathering up his work and prepping it to be added to the master reel. Here at GLEA, Colter was in to update the lead vocals on I Saw The Light and Broken Glass Corner underwent a major remodel. A new bridge was written and recorded. Lyrics will be added to this new section in the next few days.

The last major recording will take place over the last two weeks of March. There is still work to be done on background vocals. April will see the last layers of the finish work added. We are still waiting to hear if Richard Treece will be able to do some guitars, but at the moment, the logistics are proving to be difficult.