June was meant to be the buffer in the schedule. As it turns out, the extra month was needed. At the end of May it had become apparent an important piece of gear in the studio was failing. When I returned to work after our short holiday, the MOTU box died, stopping all work on the record until it could be replaced or repaired. In the end it was a case of both. A replacement was found on eBay, and the faulty unit was shipped back to MOTU. The used box arrived with in just a few days so I was able to get back to work.

The first task was to revisit The Same Mistakes, the last song mixed before leaving town. There were a couple of issues I wanted to correct. During the course of the remix, I noticed an annoying note on one of the tracks. It was the right note, but the way it was played made it stand out in an unflattering manner. It was easy enough to replace it with the same phrase from the second take. Once I was happy with the sounds, it was time to call it good, and move on, after a nearly three week break.

The next two songs came together fairly quickly. Broken Glass Corner is another one of mine. I’m still not sure when or how the music came about. The intro section has been around for a very long time. Every attempt to build a song around it had failed, but at some point I returned to it and had most of a new song completed in short order. So fast, I hadn’t written out the chords. There were also two sections of the song that were left to be determined at a later date. My guess is the music was recorded early in 2007. This song was on the original list of potential material. The lyrics came later, I think from a dream I had in early 2008. The trick was to find the melody and phrasing that would fit the track. In the end, it was assembled in one session. If I remember correctly, I considered cutting out the bridge, as I didn’t have a good idea to work with. The results weren’t any better, so the bridge section was revised for the first time. The song remained in this form for about a year. I added a guitar solo too. Not too long before Mike Musburger was to arrive, I decided the bridge wasn’t working as an instrumental section, and wrote a new part. This new arrangement would have drums playing through the 12 bars. At the last moment possible, I found the lyrics for the bridge and added a vocal. I also decided my guitar solo wasn’t as good as I would have liked, and asked if anyone else wanted to have a go at it. Bobby thought he might want to try, so it was put on his task sheet. This is where it stood when the drums were added.

Bobby Sutliff contributed two songs to the new album. A third was discussed, but we never pursued this one. You Gotta Go Now was sent over in the Spring of 2008. Bob’s demo was complete and easily could have appeared on his last solo album, On a Ladder. The note accompanying the demo invited us to “do what ever we wanted with this one”. This is the usual Brain process, so I set out to learn the song, and record a working demo. In an attempt to shake things up, I created a Ringo inspired drum loop to play over. As I played the song, I could hear a descending lick that could follow the intro riff. Deniz came around shortly after and I ran the song past him and asked if he had any ideas. He played through the changes a few times, and finally announced he wanted to change two chords. The pattern was repeated twice, and he felt the substitution would make it a little more interesting to play. We sent this new demo back to Bobby to continue working on. His first reaction was surprise, but he did like the lick I had added. He wasn’t so sure about the new chords, but once he started work on the song, he agreed it was a good decision. With the initial guitar overdubs added, You Gotta Go Now was put on the back burner. Early this year when it became apparent Mike Musburger was coming over, I asked Bob to add a guide vocal and guitar solo. A proper bass part was added to help Bob sort out the vocal. The temp drum part was heavily syncopated, and gave Bob some problem.

I explained to Mike what I had in mind for the song. I had mentioned to Bobby my drum loop was an attempt to capture the feel of Tomorrow Never Knows. He laughed and sent back the demo with Ringo’s TNK pattern looped underneath our track. With the information, Mike came in with a part that captured the feel of my concept, took out some of the syncopation that was causing Bob some concern. Tambourine and claves were added by Mike to help glue the whole thing together. With the drums finally on the track, it was sent back to Ohio to be completed. On this end, I added some mellotron, and worked out a backwards guitar part. This is always a fun challenge. It requires learning the chord changes back to front, and then playing against the track while it runs backwards. It took several attempts to get the right sound. In the end, it was a Epiphone Casino, a Beatles mid 60’s favorite, that gave me the sound I was after. I recorded several passes, and then compiled the best lines on the master. Bob meanwhile began work on the final vocals. His first efforts were hampered by a bad case of the flu. Unhappy with the harmony part he had another go which expanded the idea to include some Beach Boy harmonies, and a track treated with the ADT process, another authentic Beatles effect.

The complexity of the track made this one a challenge to mix. After several attempts we finally all signed off on a mix, only to have Bobby express doubts the next day. I had begun to change the board over for the next song, but was able to restore the settings with out much trouble. A new final mix came together quickly. Sometimes it’s best just to start all over again, rather than making endless small changes. In this case the remix was far superior to the original. The main difference was the vocal balance and EQ. The end guitar solo also caused some concern. I discovered the bass was too loud on the final section, and was what was forcing me to push the guitar up too loud. Once this was sorted and and some elements in the track brought up to the proper level, the guitar was much easier to seat in the mix.

Bobby’s other contribution was a track with no lyrics. Just a few days before I had written out a long story that would become the lyrics for a song I called High Street Hit Man. I entertained the idea of composing a mini-opera, like the Who’s Quick One While He’s Away. When Bobby’s track arrived, I decided to edit my lyric idea to fit his arrangement. The only change I made was to rework the second chorus into a bridge. If you listen closely, you will discover it is the same chord structure, just played with a different timing. I might have added a couple of chords to make it resolve. We continued to work on this right up to the very last minute. Deniz and Lila added background vocals to support the chorus. The verses still seemed a little naked, so I had Colter come in and double some of the lines of the verse. This gave it a nice texture. 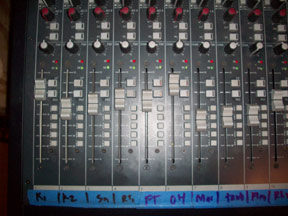 When it came time to mix, I realized there were now 8 guitar parts and seven vocal parts to mix. Mike had taken my suggestion that the drums could hint at Keith Moon literally, and given us an explosive drum track. I was stunned when Bob Brown came in prepared to play a very aggressive bass line to match the drums. There is a lot of love for the Who in the Brain camp, so this was a joy to hear come together. Most of the work on this mix was trying to get the rhythm section to lock together. There was a lot of energy there that had to balance. The layers of guitars weren’t all playing at the same time. Each part was pretty well thought out. Once everything was brought up in the mix, I did edit out some of the guitar, to make sure it didn’t become a muddy mess. The vocal parts were also heavily arranged, so it was only a matter of finding a space for everything. The bridge was a different matter. I tried several ideas and effects before hitting on an idea that worked. Just a week before I had commented to Bobby about the heavy vocal treatment on one of Tim Lee’s Windbreakers songs. By trial and error I had stumbled onto something very similar, and it worked. I liked it so much I used it for the rocking outro. It only took four tries to get the final mix. Again it was the case of returning to it the next day to make the final adjustments. This is probably the only song on the album on which all four singers in the band appear together.

This song was inspired by classic Toy-Town psych songs like Except From A Teenage Opera, and bands like the Kaleidoscope and World Of Oz. The Who influence comes from the period when Townshend was writing songs like Dogs and Now I’m A Farmer. The original idea was to have the story told by three different characters. When I edited the lyrics to fit the structure, some of the distinction was lost, and the point of view shifts abruptly. It still tells the story I wanted it to.