The week I completed the mixes, the final tracks were sent off to be mastered. My brother Vince has done our last few records. I know he’ll preserve our intent, and fix any problems. The idea is to not have any problems, but there is always something that you hear later. I only had one issue to report. The first pass showed up a couple of other areas where some work was needed. The results are what I was trying to achieve with this album. The running order and the flow are the last artistic element we can apply. If you’ve been following this, you’ll know there were several changes in the running order before it come together. It was something that was constantly being examined right up to the very last minute.

There are several competing forces involved when sequencing an album. The harsh reality is reviewers and radio programmers might only listen to a bit of the first song to decide if it is a keeper or if it goes into the trash. If they like the first song, they still may only listen to a few seconds of the next two. If you put the three best songs at the front, is the rest of the record going be less interesting? An album needs to tell a story, with a beginning and an end. The LP format allowed you to break up the story into two parts, or four if it was a double album. The Beatles “White Album” is a classic example of this. With that many varied songs, you know there was a lot of thought put into the sequence. I like to think of a CD the same way. Each “side” is a complete thought, and the two sides taken together should be a satisfying musical journey. The other consideration is the pacing of the tracks. For this album, I felt like it needed a “musical” space between songs. It wasn’t going to sound right if the songs were right next to each other, with no gap. for some reason 2 seconds is the digital default. I decided to listen to each transition and work it until if felt right. A mock up CD and notes were sent to Vince, who then fine tuned the spacing.

Meanwhile, Tom Azure was working on the delivery of the cover art. He’s got a good eye, and understands the printing process. The duplication broker doesn’t like Photoshop files as the final format. There are good reasons for this. I’m fine putting together the design, but I would never pretend to know how to work In Design and Quark. He worked to make sure the design would translate to print as intended. He had the tools and software to make it all work.

The turn around from the time our duplication house had all the files to the delivery was quick, and everything was as promised. This is our first attempt at using an all cardboard package. Jewel cases are an unfortunate choice made by the music industry when the original specs for the CD were developed. There is now a trend away from that. I have never felt that the Digipack was the answer, still too much plastic. In the last few years, the “mini album” has become popular. I like this, as it gives some of the feel of a vinyl LP and there is no plastic involved other than the disc. Unfortunately, doing a vinyl release is prohibitively expensive. The added shipping costs meant having to sell them for $30. I honestly don’t feel modern pressing quality is anywhere near as good as it could be.

Now it’s the task of getting copies to the distributors and sending out press and radio promos. These days it’s a lot easier to find people who might actually play these new releases and listen and consider writing a review. There are fewer print mags left, but there are plenty of webzines and blogs to fill some of the gap. I’m sending out fewer promos than we have in the past. It’s really a matter of getting them into the hands of people who care.

The weeks between the completion of the album and the delivery of the finished CD’s was not a quiet time. The Soul Movers had two shows booked for the middle of August, and I was assigned the keyboard duties. The task of learning 15 songs in a short time, when there was little time to spare, was daunting. The songs all had some interesting twists, as I found out. Once I sat down and spent some time with the music it did start to make sense. When we looked at the schedule, it was obvious I was only going to get one or two rehearsals with the band in Billings. I knew once I was in the room and got the feel of how the arrangements had been adapted, I would be ok. Nothing had strayed too far from the recorded versions. I just had to find what parts fit, and what I was going to play on each song, organ, piano or percussion. 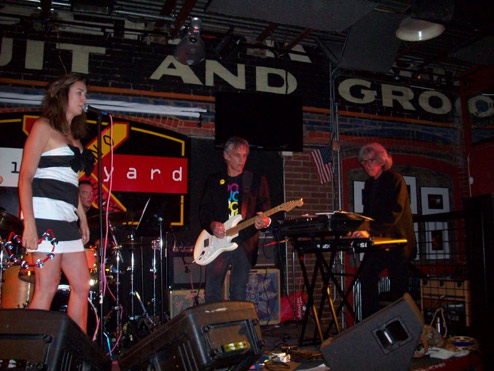 By the second day, I was starting to loosen up and dig in to the songs a little more. Everyone seemed happy, and the rough spots were smoothed out with just a few serious discussions. It was a gas to be playing live again. The all keyboard position was something new to me. A few songs featured keys, so I had to get my parts right. Back in Bozeman, I spent a lot of time playing through the set, trying to get it embedded into the memory banks.

The Billings gig was at the Railyard, a nice size club with a large stage. After some confusion is was agreed that the Soul Movers would play the first set. Things got off to a shaky start, microphone failures and a few flubbed chords. As the set progressed, we started to all come together, making the appropriate sounds in the right places.

The Bozeman show at the Filler featured two out of town bands, New Faces from Seattle and The Racquet from Missoula. It proved to be a strong bill, and the Soul Movers held their own. Tonight was a much better show for us. By now I was comfortable with the songs and was able to play around the songs, and interact with Deniz and the rhythm section. The small crowd was appreciative and made the show an enjoyable event. 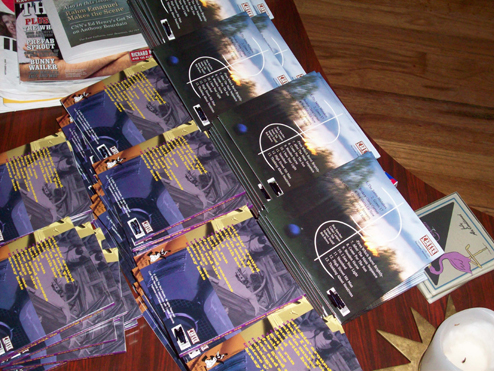 Making music is the fun part of the process. The headaches involved in the duplication and printing process are minor compared to the satisfaction knowing the problems have been solved and the album will be delivered as planned. All this is part of the responsibilities of running the label. Once the cases of CD’s have arrived, the next steps are a bit more mundane. Filling the orders for the distributors, creating the CD Baby pages, bundling up the promos will take up most of my time for at least three weeks.

In the back of my mind, there was some concern about the mailing list database. The list was created when we started Career using Appleworks, a now obsolete program. It was also clear I would need to update our contacts. To complicated matters, Appleworks had lost some of it’s essential functions when I did an OS upgrade and I wasn’t sure if this OS9 software would work with my printer.

The first task was to cull our mailing list, and check to make sure all the remaining contacts were valid. Magazines and web sites seem to come and go at an alarming rate. In the end, I removed over 100 entries from the list. I also discovered that I could in fact print labels on the new office printer.

Appleworks Data Base was a very well designed program. You can easily convert a spreadsheet into a printed layout, by simply choosing a different view. While discussing my problem with Karen, she mentioned that Word also had Avery templates. I’d never run across this function and didn’t want to have to interrupt the promo project to learn. In the end I managed to get mailing labels printed and the 200+ press kits mailed out. Before I put it away, I decided I had better move the database to something a bit more robust. One of the problems with the crippled Appleworks was the inability to export the data. Attempts to cut and past from the spread sheet view would cause the program to crash. In a fit of desperation, I took a look at Excel and Word to see if I could make sense of Microsoft Office. Success. Unlike Appleworks, you need to merge data from a spreadsheet into a Word document. I spent an afternoon experimenting until I was satisfied this would work for me. This meant I might have to re-enter all the data by hand. In a last ditch effort, I tried cutting and pasting from the “browse view” in Appleworks. While this meant copying the entries line by line the program didn’t crash. I did another round of updates as I moved the data to Excel. While researching radio contacts, I found a web listing of all the non-commercial radio stations in the US. This proved handy, and offered some insight into the state of college radio. I had to be sure a station had a show that played similar music and might be familiar with Donovan’s Brain, Deniz Tek, Roy Loney or Bobby Sutliff. If they met this basic requirement, they were added to our list, and sent the new releases. I also poached a few contacts from indy promo man Ray Paul’s emails. In true Microsoft fashion, the Data Merge function was not without it’s own problems. At least the list is now updated, in an easy to use format. It’ll be a while before I will need to do a complete mailing, so I can forget about it for now.