Summertime And The Living Is Easy

I’m back to work on the Brain matter after a couple of weeks off. When Deniz was here mixing the Soul Movers, he took time to add a new guitar solo to Your Number. I had done both the two solos on the original version, but I felt like one or both could be updated. Den disagreed, and thought the second solo should remain as performed. That was fine by me. The song is in Bobby Sutliff’s hands now to add a new 12 string part.

The current project is getting the song currently titled “Ron’s New One” into shape. I redid the drums as suggested by Bob Brown. When I got it sorted out, I decided to start over again, at a faster tempo and with the intro section removed.

A few weeks ago, I had Ric Parnell as a guest on my radio show. Nancy Walton had alerted me to Ric’s recent move to Livingston, just over the hill from Bozeman. The name may not be familiar, but most people would recognize him as the drummer for Spinal Tap. He appeared in the movie, played drums on the albums and toured with them. It was his membership in the early 70’s UK band Atomic Rooster that earned him the coveted role. Once I had the chance to talk to him, I found out he has had a long and colorful musical history. He can now add Donovan’s Brain to his CV. 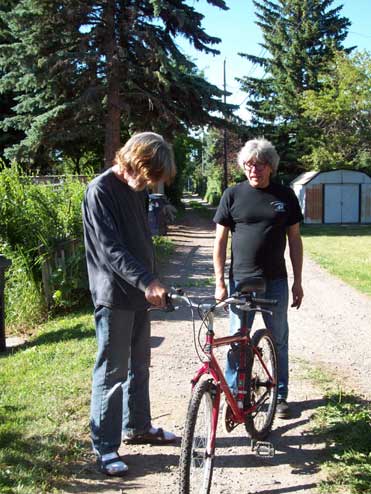 Prior to the interview, I asked Ric to send over a list of music he’d like to play. The choices were all favorites of mine, so I knew we’d have a lot to talk about. Before he left, I gave him a copy of Fires Which Burnt Brightly, and asked him if he’d be interested in doing some work with us on the new album. He seemed pleased to be asked, and said he’d be waiting for my call. This meant finalizing the arrangements for the new songs. I didn’t want to wait too long, but there would be no point in having him over if the material wasn’t ready. In the end, there were seven songs for the new album which we would work on. I also organized some of the Shambaholic material in the event we had time to add drums to any of those. We managed to complete drum overdubs on ten songs total. This was considered a very productive two days.

I figured we should start the session with one of the more complex songs. Sounds Of ’73 was written in 1992 or ’93. I recorded three demos, the final one being the basis for the new version. I had revisited this idea when we were recording Tiny Crustacean Light Show. Punch Wax Circus was the result. We liked it enough to complete the track and perform it live. When it came time to choose songs for Tiny Crust and Great Leap Forward, it never seemed to fit. The new set of lyrics were an attempt to write total nonsense. The addition of Ric’s drums assure that this will finally see the light of day.

With the album moving forward, Colter and Bobby have stepped up their writing and have both promised songs in the next few days. While Ric was here, Bobby sent over a demo for a brand new number. He’s also meant to be working on a new version of Nothing Lasts Forever. We had talked about doing this one for Fires, but it got set aside when it was clear we had more than enough songs for the record. Unfortunately, the original recording was lost, so a new track is being assembled for the next drum session. Colter had promised four new songs. I hope to meet up next week to cut demos for these. These songs, and one more of mine will give us plenty to work on for the album. It is always possible there will be more songs offered up before we complete the album. At the moment there are nine songs that have drums and which are all under consideration for the next album. The most optimistic time line puts the released date in the late summer of 2011.

The next task was to do some quick rough mixes of the tracks. The Bobs can use these to start adding overdubs, and it gives everyone else a chance to hear what we have done so far. I was confident we had got a good drum sound and these mixes confirm that. The playing is solid and creative on every song. Having the drums on the tracks this early in the process is a luxury. The last album didn’t have drums added until the very last possible moment. While there is nothing wrong with that approach, working with a real drum track will give the process an organic feel. With the band spread around the country, getting together to cut tracks as a band becomes nearly impossible. Bob Sutliff and myself usually work alone in the studio, so the current recording methods aren’t foreign. Building songs using drum loops gives us a live feel to start with. By the time the song is written, the track is far enough along to be considered a master.

For the new album, I’ve kept the tracks fairly basic, as I wanted input from the others before I had gotten too involved. With the drums now in place, I can move forward on the songs.